This post may contain affiliate links. If you click on a link and make a purchase, I may receive a small commission at no extra cost to you. For more information, please read my disclaimer here.

I have some exciting news for my Journey to SAHM readers! I’m having a baby! We are so excited for Leah to be a big sister and she already loves the idea of having a baby around. Obviously, that might change once there is an ACTUAL baby in the house. Either way she was fully cooperative during our pregnancy announcement photo smiling like crazy.

I love to write based on personal experience, so I want to take you along for the ride of this pregnancy. Here is how we went from struggling to conceive to our pregnancy announcement! I’ve also included what I consider the holy grail of ovulation kits that finally helped us. 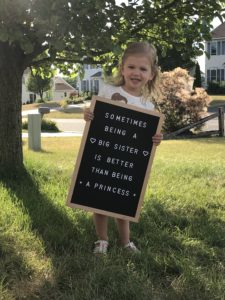 It was a bit of a change from getting pregnant with baby #1 to baby #2. We got pretty lucky with baby #1 and got pregnant the first month we tried. This time around that didn’t happen. As I write this, I’m watching a Keeping Up With the Kardashians rerun. Yes, it’s a guilty pleasure during the day when there’s not really anything else on. This specific episode is Kim having difficulties getting pregnant and she said something that was so relatable. “I hated being pregnant the first time. I never thought I would be begging to get pregnant this time around.” That is exactly how I felt.

We tried for about 4-5 months and nothing. By the 4th month, it was so frustrating I honestly didn’t even want to try anymore. I was worn out. Turns out we weren’t being strategic about it. We just tried every time we could. I started using a generic brand ovulation kit that had good reviews at Wegmans. I can’t tell you how hard it was to read the results and it just got so expensive! After 3 months of using the kit, still no results.

The Best Ovulation Kit Out There

My saint of a husband decided to search Amazon and found another ovulation kit called [email protected] Ovulation Test Strips. It came with 50 ovulation sticks and 20 pregnancy tests for LESS than $20. It had good reviews, so we figured at this point, why not? Per suggestions of the kit, I taped each day’s test to a sheet of paper to see which lines were darker. It was still hard to read, but we tried every time we thought the line looked darker.

We honestly tried 2 times that month. Obviously, I was not going to pregnant since we had tried 15 times in a month and still failed, right? Wrong. I got pregnant the first month using the ovulation kit. I honestly suggest taking a look at this kit if you are looking to or trying to conceive. It’s like the holy grail of ovulation kits in that it’s very affordable and works great! I have also run across others on social media that have had the same experience as me with this kit, so it was not just luck!

Am I Pregnant or No?

The week before my period was due, I was SO tired. I literally would fall asleep on the couch during the day because the fatigue was so bad. I didn’t “feel” pregnant, so I figured it was my usual low energy during that time of the month, just on steroids. It was a common symptom I noticed every month after getting off birth control. I’m not truly anemic, but I think my iron levels played a part.

I had taken so many negative pregnancy tests 2 days before my period was due that I told myself I would not take one until it was actually due. My period is basically exactly 28 days, but still at day 26 or 27, I would convince myself since I didn’t get it yet, I MUST be pregnant. I kept being wrong, so I gave up and waited.

The morning my period was due, it still wasn’t there (because you know it could still come later than 8 a.m.). I immediately took a pregnancy test and was so disappointed to see it be negative AGAIN. I told my husband about the negative test to keep him in the loop and we knew we had at least another month ahead of us. Then I moped around for the day waiting for my period to come. It didn’t.

There was Still Hope

Two days later, I took another test. After 1 minute, I saw it was negative. I told myself, be patient and wait the 5 minutes the test said. 5 minutes rolls around and I see the faintest line there ever was. Cue me telling myself, I might actually be pregnant! Still in my mind, it was a false positive. I convinced myself I was imagining the line on the stick. So off to Wegmans I went to get a first response stick with my daughter. I didn’t keep any in the house anymore because I just kept using them and it was adding up in cost.

I came home and took another test. Another faint line! I still wasn’t completely convinced, but I read that a false positive is very rare, so two of them back to back would be almost impossible. I immediately told Leah she was going to be a big sister!

The Pregnancy Announcement to my Husband

With our first baby, I took the pregnancy test together with my husband so we knew at the same time. I wanted to do things differently this time. I wanted to surprise him. Since we had been trying for a while, I already knew how I wanted to tell him. I had bought a “I am a Big Sister” book that was wrapped in Christmas wrapping paper in hopes I was pregnant back in December. That obviously didn’t work out, so I hid the book, still wrapped, in one of my clothes drawers. I unwrapped the book and put it in an easily accessible place for when my husband got home to do an official pregnancy announcement.

Once my husband, Ben, got home from work, I brought Leah downstairs so she could give him the book to read. She loves reading. We honestly read at least 15 books a day. Book subscriptions like my Bookroo post are just one of the ways we keep her entertained to read. My idea was to have her run over to him to read the book, which she would frequently do.

I was halfway down the stairs with her and the book (too far down to turn back) and she got cranky. She didn’t want to give him the book and wanted to run off. So basically, I held Leah’s hand with the book and we both gave it to him while she was still fussy and upset. He didn’t care it didn’t go to plan and was thrilled. He said he didn’t expect a pregnancy announcement because of my negative test 2 days prior. I can’t even tell you how big the smile on his face was. Definitely worth telling him that way. I also found out he didn’t have the best day at work, so this turned his day around!

Stay tuned for a new pregnancy section on the site under Mom Life. It will include pregnancy updates and ways to make pregnancy easier (yes bump updates will be included!). 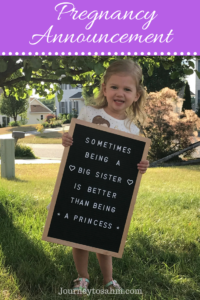 […] June, my husband and I found out we were expecting (See our pregnancy announcement here). Well, morning sickness followed for almost 3 weeks and I had no desire to even write articles on […]

Announcing Your Pregnancy On Facebook- Ideas For Any Scenario -

[…] adorable photo announcement comes from JourneytoSAHM. You can check out her pregnancy announcement post […]

Bump Update: Week 12 - Follow me with my pregnancy on Journey to SAHM

OMG YAYY! Congrats to you guys and congrats to big sis, Leah!

Thank you Amanda! We are so excited! Leah can't stop telling me how much she wants to be a big sister! 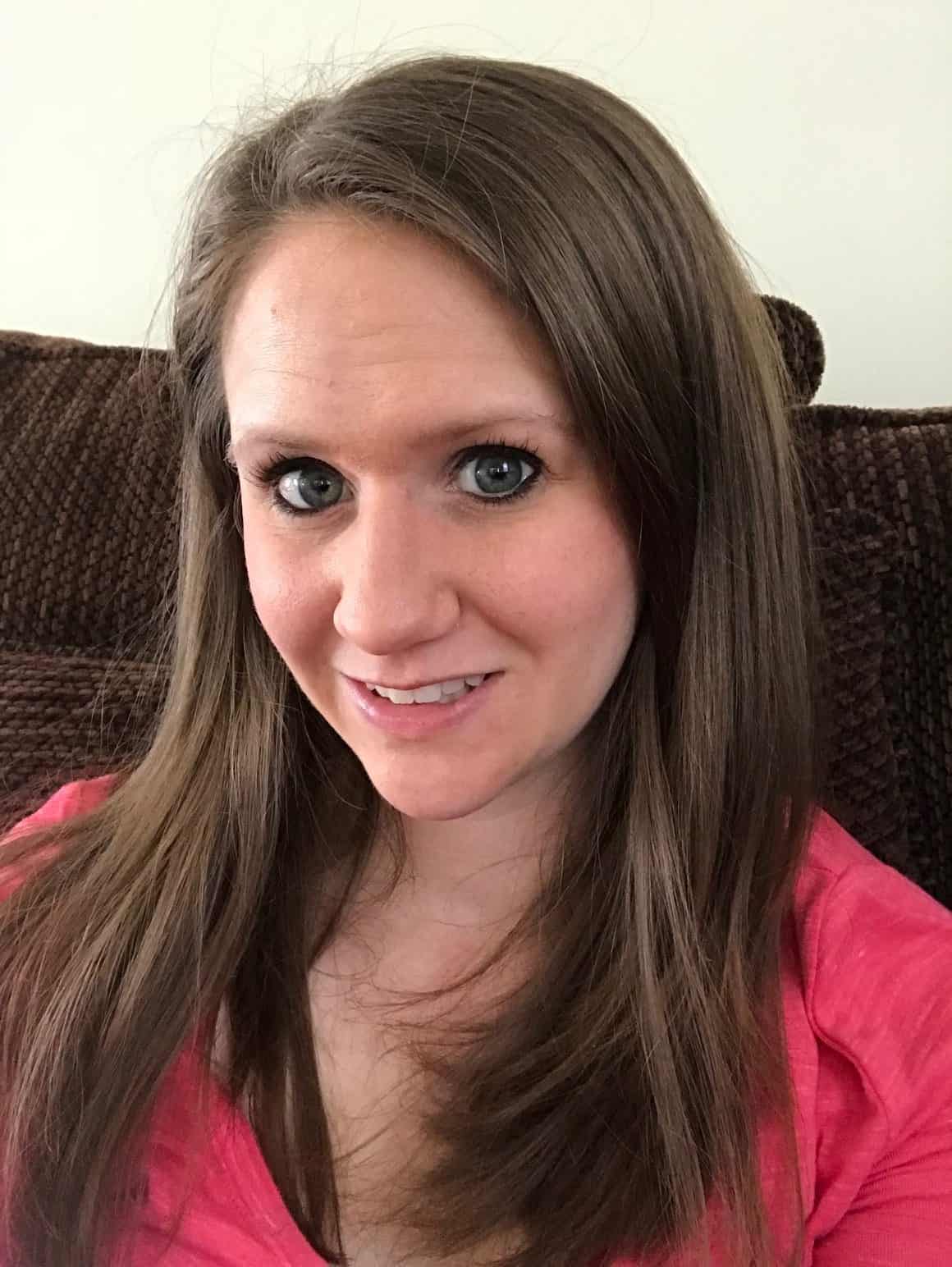 I’m Samantha and I’m here to make life with kids a little easier through fun activities and crafts!